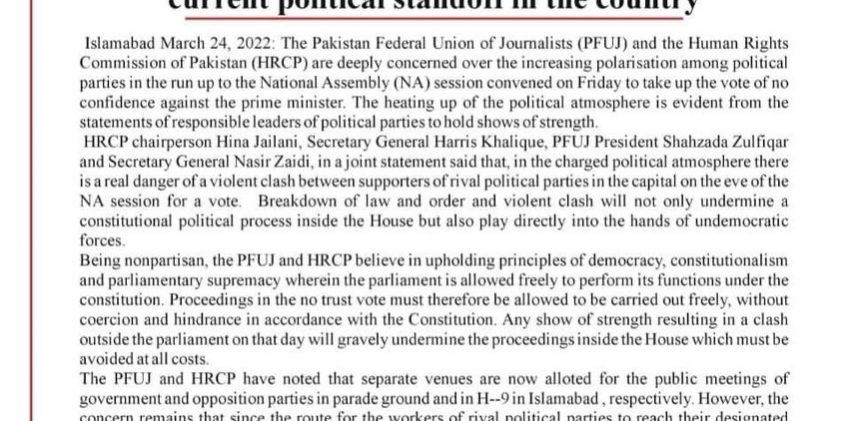 Islamabad March 24, 2022: The Pakistan Federal Union of Journalists (PFUJ) and the Human Rights Commission of Pakistan (HRCP) are deeply concerned over the increasing polarisation among political parties in the run up to the National Assembly (NA) session convened on Friday to take up the vote of no confidence against the prime minister. The heating up of the political atmosphere is evident from the statements of responsible leaders of political parties to hold shows of strength.

HRCP chairperson Hina Jailani, Secretary General Harris Khalique, PFUJ President Shahzada Zulfiqar and Secretary General Nasir Zaidi, in a joint statement said that, in the charged political atmosphere there is a real danger of a violent clash between supporters of rival political parties in the capital on the eve of the NA session for a vote. Breakdown of law and order and violent clash will not only undermine a constitutional political process inside the House but also play directly into the hands of undemocratic forces.

Being nonpartisan, the PFUJ and HRCP believe in upholding principles of democracy, constitutionalism and parliamentary supremacy wherein the parliament is allowed freely to perform its functions under the constitution. Proceedings in the no trust vote must therefore be allowed to be carried out freely, without coercion and hindrance in accordance with the Constitution. Any show of strength resulting in a clash outside the parliament on that day will gravely undermine the proceedings inside the House which must be avoided at all costs.

The PFUJ and HRCP have noted that separate venues are now alloted for the public meetings of government and opposition parties in parade ground and in H–9 in Islamabad , respectively. However, the concern remains that since the route for the workers of rival political parties to reach their designated places for public meetings being the same there is a real danger of clashes between charged workers on the day.

It is in this spirit of democracy having the last laugh that the PFUJ and HRCP urge that all political parties whether aligned with the government or in the opposition refrain fromq holding any public meetings in Islamabad until the no trust move has been disposed of in the Parliament in accordance with the Constitution. Political parties may hold such public meetings in the capital if necessary only after the no trust vote has been decided upon.

They cautions the parties against taking their political fight from inside of the House to outside.

“We have high hopes in the wisdom and sagacity of all political parties to heed the voice of reason and caution”, the statement further said.