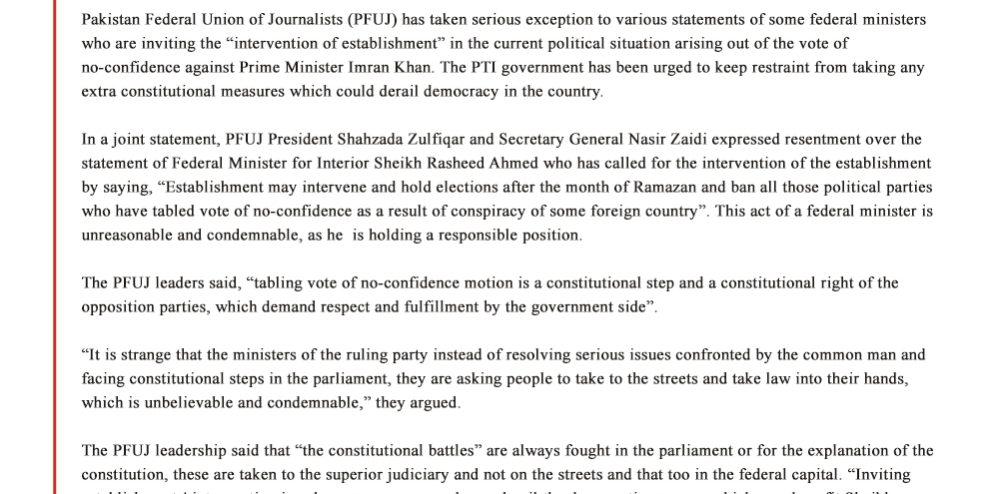 Pakistan Federal Union of Journalists (PFUJ) has taken serious exception to various statements of some federal ministers who are inviting the “intervention of establishment” in the current political situation arising out of the vote of no-confidence against Prime Minister Imran Khan. The PTI government has been urged to keep restraint from taking any extra constitutional measures which could derail democracy in the country.

In a joint statement, PFUJ President Shahzada Zulfiqar and Secretary General Nasir Zaidi expressed resentment over the statement of Federal Minister for Interior Sheikh Rasheed Ahmed who has called for the intervention of the establishment by saying, “Establishment may intervene and hold elections after the month of Ramazan and ban all those political parties who have tabled vote of no-confidence as a result of conspiracy of some foreign country”. This act of a federal minister is unreasonable and condemnable, as he is holding a responsible position.

The PFUJ leaders said, “tabling vote of no-confidence motion is a constitutional step and a constitutional right of the opposition parties, which demand respect and fulfillment by the government side”.

“It is strange that the ministers of the ruling party instead of resolving serious issues confronted by the common man and facing constitutional steps in the parliament, they are asking people to take to the streets and take law into their hands, which is unbelievable and condemnable,” they argued.

The PFUJ leadership said that “the constitutional battles” are always fought in the parliament or for the explanation of the constitution, these are taken to the superior judiciary and not on the streets and that too in the federal capital. “Inviting establishments’ intervention is a dangerous course and may derail the democratic process, which may benefit Sheikh Rasheed and some other like-minded people, however, only for a short time,” they reminded.

Both the leaded demanded “utmost responsible behaviour from the federal ministers during sensitive times faced by the country and expect all the stakeholders, including the establishment to show restraint from listening to conspiracy hatchers and respect the Constitution of Pakistan, which is supreme by all means”.
No step will be acceptable which may create chaos and anarchy in the country, they said and added the “country cannot afford any unconstitutional steps which are against the desires and expectations of the people of Pakistan”.

PFUJ leaders said “we stand with the constitution, democracy as well as strengthening of democratic Institutions, supremacy of constitution, press freedom and the parliament, besides the independence of judiciary in such a situation,” they reminded.